Home » About us »The Building » The Interior 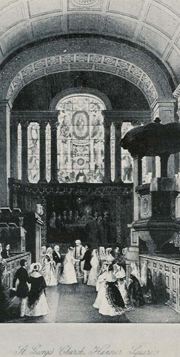 A wedding in St George's in 1842.The picture shows the original box pews, the canopy over the pulpit and the "double-decker" reading desk to the left of the altar.

In comparison with other churches of the period, St George's is singularly lacking in ornament. This accords with James's belief that "the Beautys of Architecture may consist with the greatest plainness of the Structure". It follows Wren's ideal plan for Anglican churches, where visibility and audibility were supremely important, of a spacious nave with aisles, above which are carried galleries on three sides. The structure of the church has remained, but the furnishings have been much modified. Change began in 1871, when Benjamin Ferrey reduced the height of the box pews, removed the heavy canopy over the pulpit, and cut down the cumbersome "double-decker" reading desk to more modest dimensions.

Further modifications took place in 1894 under the direction of Sir Arthur Blomfield, who remodelled the pews, using the oak of the old ones, removed altogether the old reading desk, lowered the pulpit, placing it upon six carved columns, and laid the wooden floor in place of the original stone paving. At the same time a chancel was created with a black and white marble floor and with choir-stalls to accommodate the surpliced choir of men and boys, which at Michaelmas 1885 superseded the mixed choir which use to sing in the west gallery. The organ console was transferred from the gallery to the south side of the choir.
In 1926 Sir Reginald Blomfield completed the chancel by setting up the carved screens supporting small black and gold Doric columns under the gallery on each side of the choir. At the same time he designed the side chapel on the north side. 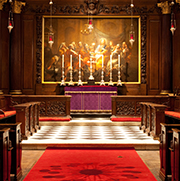 Above the Altar, the reredos frames a large picture of the Last Supper painted by William Kent (1684-1748) very much in the style of the 17th century French painter Nicolas Poussin. The disciples recline on couches round the table, while to the left of the picture Judas may be discerned on his way out. For many years the picture was ascribed to Thornhill, but the antiquary, George Vertue, a friend of Kent, states it to be by him, a fact confirmed by a letter of Kent's dated July 23rd, 1724. Fine carvings by a manifest pupil of Grinling Gibbons, who died in 1720, surrounds the picture. Coupled Corinthian columns are set against the canted side of the reredos. The seven silver hanging lamps in the sanctuary are a reminder of the vision of God's Throne in Heaven in the Book of Revelations; "there were seven lamps of fire burning before the throne, which are the seven Spirits of God." (Rev. 4,5).

The Stained Glass.The upper wall above the Altar is filled by a venetian window with a segmental top and coupled supports, containing some very remarkable stained glass. Originally this adorned a Carmelite church in Antwerp, which was closed as a result of revolution and Napoleon Bonaparte's religious policies. The glass date from about 1525 and was made by Arnold of Nijmegen (c.470-1540). It was acquired early in the 19th century by the 1st Marquess of Ely, who intended it for his private chapel at Rathfarnham Castle, near Dublin. The glass however remained in store in London and was subsequently bought for St George's in 1840. Designed for a tall gothic three-light window, it was adapted for its new home by Thomas Willement.

The glass represents the Tree of Jesse in the form of a vine from which spring the figures of Kings who were the earthly ancestors of Our Lord. In the centre light, at the bottom, Jesse sleeps in an elaborate throne, in the head of which are set medallions depicting St George,, Victory, and Isabella of Portugal, wife of Emperor Charles V. St George was substituted for the Emperor by Willement. The figure of 'Victorie' implies that the window was a thank-offering for the return in 1522 of the ship Victoria from sailing round the world, the only survivor of Magellan's expedition. 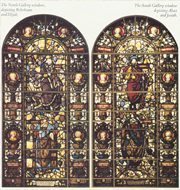 To the left of Jesse stand Aaron and Esaias, to the right Moses and Elias. In the high oval panel above the throne is the standing figure of Our Lady with the Child Jesus. To the left are Josaphat and Osias, and on the right Manasseh and Jechonias. Above our Lady hovers the Holy Dove. The figure of God the Father which was the summit of the original window could not be fitted into St George's and is now at Wilton, near Salisbury.

The main window was slightly damaged in 1914 by a bomb placed in one of the front pews by a Suffragette. During the two world wars the glass was removed and stored in the crypt.